How can you talk about post-nuclear fiction without talking about Mad Max 2: The Road Warrior? Director George Miller set the tone of an entire genre with his high octane sequel, but the truth is that Mad Max 2 is not a post-nuclear film. The first two films showcased crumbling and inevitable downfall of society, but it was not until Beyond Thunderdome that the theme of post-nuclear survival came into play.

The original Mad Max chronicled the downfall of society. Gang members from the dying cities fled into the Australian outback, feasting on their fellow men while cops tried to uphold some semblance of law.  There was no mention of radiation, mutation, or fallout.  Likewise, the opening narration of Mad Max 2 did not include any mention of nuclear weapons either, but rather, “Without fuel they (the great tribes) were nothing. They build a house of straw. The thundering machine sputtered and stopped”.  Originally, the world of Mad Max was about an energy crises that caused all cities to stop and fall apart. The Road Warrior follows up on that, showing what happens after society has collapsed.

The factions of Mad Max 2 forever changed how writers approached post-apocalyptic fiction. The Road Warrior normalized four distinct archetypes that would appear in the majority of other post-apocalyptic works. Those are: 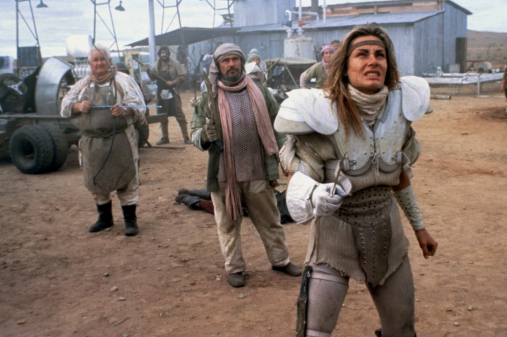 Pappagallo represents the peaceful tribe. He and his people are the common settler’s seen in the majority of post-nuclear fiction. These archetypal factions don’t try to rebuild an image of the past. Rather, they carve their place out of the new world. What separates this archetype from scavengers is that they grow a community and build with what they have. The opening narration of Mad Max 2 says that food became scarce, but we see chickens running around Pappagallo’s village. The settlers do not hope to find that last can of dog food, instead they build upward. They are humanity’s last hope.

The Lord Humungus and his bikers set the tone for all villains in both future post-apocalyptic movies and crime movies. They are like the Harkonnen in Dune or The Empire in Star Wars, villains who are 100% evil (or are they) so that the audience has someone to root against. Despite being an ancient cliché, it works. An audience is far more likely to sympathize with an emotionally distant protagonist (like Max) if their antagonists are utterly monstrous.

The bikers in Mad Max 2 represent something deeper in the archetypes of post-apocalyptic fiction. Humungus and his clan are vultures, feeding off the old world without putting anything into it. Once the last can of dog food is gone, once the last settlers are tortured and killed, once the last can of guzzolene used up, they will have nothing left. The bandits in post-apocalyptic fiction function on a pillage economy. The problem is that -as the Roman Empire feared- once you conquer the whole world, you will collapse.

Max Rockatansky is the lone wanderer, a self-interested loner who clings to memories of the past. Throughout every Mad Max film, Max begins as little more than a wandering mercenary, but his history as an ex-cop kicks in and he willingly charges into the fray to defeat a great evil. On the surface, there is little difference between the vulture-like bandits and the scavenger. Yet the lone wanderer archetype is something more. Like a mysterious stranger in a western, Max appears at a tribe’s darkest hour and once they are out of harm’s way, he disappears again as though he were never there.

Finally, there is the feral future. The feral kid is symbolic of the future of mankind after the downfall of society: ape-like, savage, and brutal. Feral kid shows what happens when we abandon all technology and start over; returning to an age of hunting and gathering, living off the fruit of the Earth rather than building upon it. Yet there was hope for this child, he was taken by Pappagallo’s tribe, became a man, and eventually a leader. So long as skills and stories of the old times are passed down, mankind’s fire will never die, even if it is momentarily reduced to embers.

On the surface, Mad Max 2 is a standard action movie with interesting visuals and incredible stunts, but there’s more to it than that. The Road Warrior defined a genre without actually being a part of that genre. It is the story of a man looking for gasoline, but it is more than that. It is a story about the choices we make after the downfall of society. Nearly every post-apocalyptic story travels at least one of these four roads. Do we carve a new life from the old? Do we feast on the world until there is nothing left? Do we help those in need, taking anything they can offer? Or do we return to our roots and start from scratch?

3 comments on “How Mad Max 2 Defined a Genre”