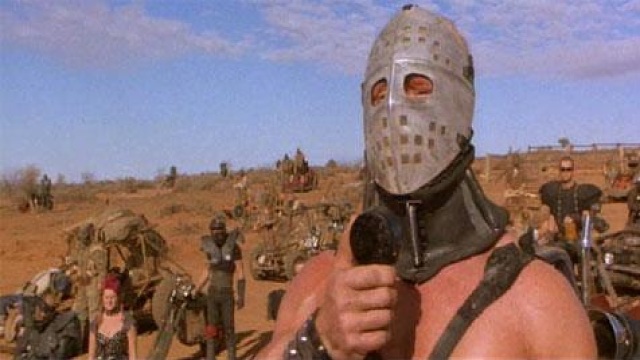 The Lord Humungus of Mad Max 2 is a perfect illustration of how an outwardly one-dimensional villain can become human through small details. Looking at The Road Warrior’s script, one would get the impression the Lord Humungus is just a means of creating conflict, but the visual medium of film allows this character to become two and maybe even three dimensional. Cleverly, director George Miller planned for this from the beginning by writing backstories for each character in the Mad Max franchise.

The best way to make a villain memorable is with a striking appearance. The best way to make aa striking appearance is to obscure someone’s face. This simple choice does two things: it makes the viewer want to know what’s under the mask and causes the viewer recognizes a specific mask as iconic as it’s more memorable than someone’s face. These are just a few of the reasons why Star Wars’ Darth Vader instantly became a culture icon.  Lord Humungus is instantly recognizable as well. Humungus’ hockey mask is iconic in its dull metallic sheen, but noticeably different from Friday 13th’s Jason Voorhees.

Humungus’ mask serves a purpose. It is hiding something. Director George Miller went out of his way to get a shot showing Lord Humungus has no ears, his head is sickly (with visible veins on the scalp), and his hair is wispy (outwardly looking like radiation sickness). Notice we first see Humungus’ scars just as he says “We all lost someone we love”. This leads the audience to wonder if the two are connected, if somehow Humungus got his scars while trying to protect someone he cared about and it is because he failed that he became a monster.

From the standpoint of art direction, the genius of Humungus’ appearance is more than a mask, it’s his clothing and physique. Notably, Humungus wears a thick rubber collar which enhances the size of his neck, giving him a more masculine and intimidating appearance to match is already intense muscle-mass. 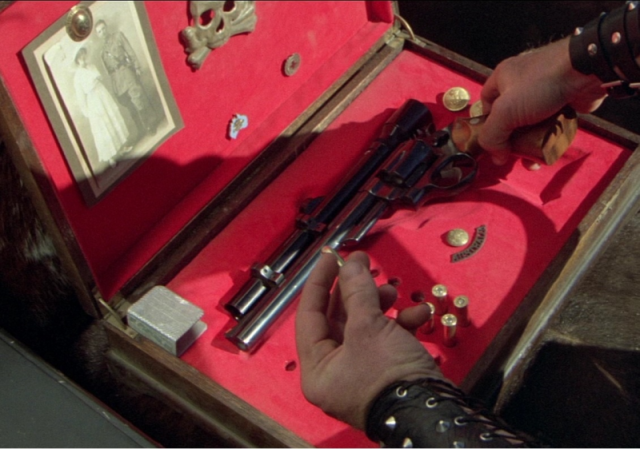 They say you can tell a lot about a person by the contents of their wallet. In Mad Max 2, you can tell a lot about a raider by the contents of his gun case. In a world where everything is decaying, Lord Humungus has a beautiful case for his .44 revolver. The chest contains a few pins of the Australian army, a WWI-era military photograph, many missing bullets, and most interestingly, a Prussian Totenkopf (more on that later). Just by looking at this case we know a lot about Humungus. Primarily, we are led to believe he was once a soldier (which may explain why he has so many ex-policemen in his tribe). In a 1984 interview, George Miller confirmed these suspicions, saying Humungus was written as having been a “military man.”

When Humungus actually uses his revolver, notice he still has several bullets remaining, until the very end of the movie when the rig breaks through his blockade. This seems to reinforce the idea that Humungus is willing to compromise and wishes to avoid violence and pain when possible. It’s a subtle touch, but an important one. Another creator could have given Humungus a side arm with infinite ammo to create drama. George Miller gave Humungus a backstory and character traits told through his personal effects. 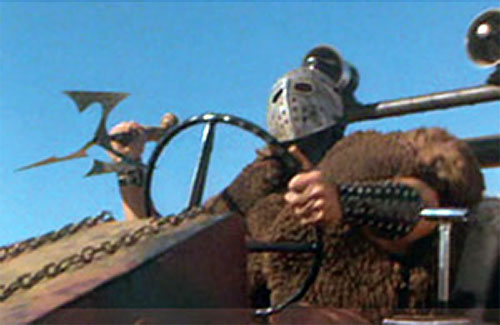 Humungus’ vehicle also says a lot about him.  The marauder king’s truck is like a mobile throne, adorned with tritons, nitrous, and hides. The two prisoners strapped to the front of the vehicle have always captured attention and been a landmark of the Mad Max franchise. It is especially interesting how Humungus singled out Pappagallo (the leader of the opposing tribe) and killed him personally. A killing spear thrown from a moving vehicle shows Humungus’ immense strength and demonstrates why he is in charge.

The minions of Lord Humungus are reflections of the man himself. Toadie (the herald) shows Humungus’ dramatic side, building him up as a prophetic figure of the wasteland. Wez (the warrior) represents the insanity of the post-apocalyptic world, where men chase their desires without any forethought to their consequences and devolve into animals.

The relationship between Humungus and Wez is perhaps the most interesting. Wez is his master’s Id, desperate to slaughter in his wanton quest for revenge, but he is physically kept in bondage by Humungus’ chains once he is revealed to be too bloodthirsty.  Wez is Humungus’ last resort, a true dog of war unleashed only for the most desperate situations.

Finally, there is Humungus’ speech style. Whenever Humungus speaks, the audience gets a glimpse at an educated man in great pain. Though his followers are primarily ruthless vultures, Humungus offers Pappagallo a chance to “just walk away”, stating here has been too much violence, too much pain. Whether or not this was a genuine offer or a trap only George Miller knows, but it shows Humungus is cunning, intelligent, and perhaps even merciful. 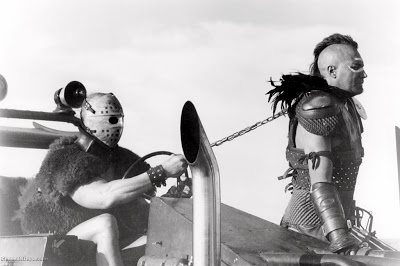 Most interesting about Humungus’ relationship to his soldiers is the use of homoerotic undertones. In one scene, the warlord can be heard calling for “Gayboy Bereserkers” and “Smegma Crazies.” This throwaway line combined with Wez’ relation to the Golden Youth raises questions about the tribe’s role in a post-society world. Certainly, the marauders aren’t exclusively gay as there are multiple females seen in the initial refinery siege and the infamous “tent lovers” scene.

Finally, in Lord Humungus’ gun case we find a Prussian Totenkopf which is combined with another small detail greatly expands the lord’s character. During the night torture scene, Humungus can be heard reciting “Mein Sohn, mein Sohn” and “Mein Vater, Mein Vater”. These are lines from the Prussian philosopher Goethe’s (pronounced Ger-ta) poem “Der Erlkönig”. The poem describes a child who cries to his father that he is being attacked by unseen forces. The father ignores the boy and when he finally looks down, the child is dead.

Perhaps Humungus is using this is a metaphor for the collapse of society. More impressive is Humungus (presumably an Australian soldier) delivering this in the German tongue. From this tiny quote, we know Lord Humungus is tremendously well educated as he is able to recite an 18th century German poem from memory.

The character of Lord Humungus shines through in the visuals and movements. The little details about this antagonist tell the audience everything they need to know about the dogs of war without any exposition. Subtle characterization is best achieved by knowing your characters before putting them in a situation. For over 30 years, George Miller has been a master of this subtle character development starting with The Road Warrior and showing that he still has it with the characters of 2015’s Fury Road.

15 comments on “The Complexity of Lord Humungus”