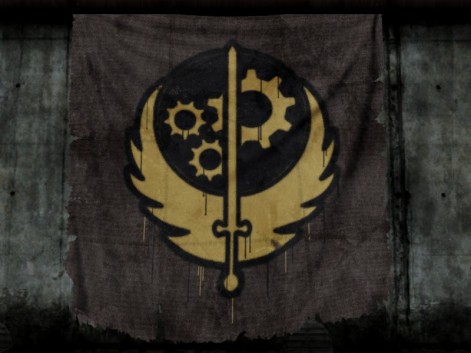 Previously, we analyzed the Brotherhood of Steel in the first three Fallout games. Now, lets turn our attention to Fallout 3 and Fallout: NV. During the transition from isometric to 3D, the Brotherhood of Steel got dipped in the F.E.V.,  mutating the faction until it was barely recognizable as the force it once was. The BoS is the only faction to appear in every Fallout game, but it seems none of the writers know exactly what to do with them. 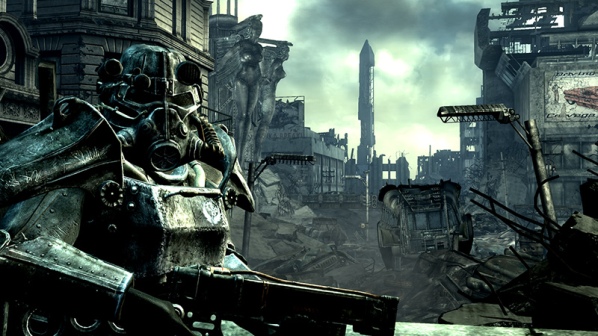 In Fallout 3, the Brotherhood of Steel became something players had never seen. Following up on Fallout Tactics, the Brotherhood moved east again, requiring a backstory even longer and more convoluted than the original Brotherhood of Steel in Fallout.
Apparently, the reason for the BoS mounting an east coast expedition was because there were reports of super mutants in Washington DC. How this information traveled 3000 miles in a world without long-range radio and without any Brotherhood operatives actually being on the east coast is anyone’s guess.

Leading this expedition was Paladin Lyons (later Elder Lyons) who brought his 3-year-old daughter on a 3000 mile expedition (on foot) across radioactive deserts swarming with mutants and blood cults. What could possibly go wrong?

The Lyons expedition then came across the ruins of Pittsburg (The Pitt) and cleansed the entire city in an event called “The Scourge”. The result was a great power vacuum that allowed the events of Fallout 3 to occur. Remember that Lyons still had a toddler to take care while he was purging the city.

The expedition finally moved to DC. Finding the city was overrun by super mutants, Lyons pushed back the green tide and transformed the ruined Pentagon into a fortress. Lyons shifted the focus of his army from the preservation of technology to ending the suffering of the Capital Wasteland.

Lyons’ focus on the settlers and people of the wasteland caused a divide. Traditionalist members of the chapter, who only wanted to preserve and research technology, formed their own sub-faction: the Outcasts.

According to Fallout 3, the Outcasts adhere to the tenants of the western Brotherhood of Steel. Based on previous Fallout games, this is largely true. The Outcasts hoard advanced technology to keep it away from common wastelanders. This is in line with Maxson’s notes from the first Fallout, but it isn’t in line without how the Brotherhood actually acted during the game.

The Outcasts are mostly representative of the Fallout BoS. They are outwardly friendly, educated, and approachable. They do not murder for technology and are happy to give their trust to any scavenger who is shown to support their cause. The player can gain entry to their fortress by exchanging technology with them. Keeping with the theme of technological preservation, the Outcasts have an interactive weapons research lab inside their fortress and are often seen patrolling with robots. The colors are different, but this feels similar to the Brotherhood’s original portrayal. However, while Vree was building new laser pistols and dissecting mutants, the Outcast weapon’s lab takes a step back, merely explains how weapons work.

Lyons and the eastern Brotherhood are portrayed as humanitarians, but it doesn’t really come through. In the base game, the Brotherhood talks about helping people, but they only operate within the city ruins. No one in Megaton or Rivet City has opinions on them.  It’s hard to say that they’re keeping the mutants in check, because the mutants come from Vault 87, which is on the opposite side of the wasteland. It raises the question as to what the eastern Brotherhood is actually doing.

In the Broken Steel DLC, the Brotherhood took a greater humanitarian role, controlling the water purifier and distributing water to distant settlements. The eastern Brotherhood’s actions doesn’t make the western Brotherhood evil, it just means they have different priorities. The traditional Brotherhood uses the knight motif as an organizational structure, but Lyons group imitates the image of knights in shining armor.

In Fallout: New Vegas, the western Brotherhood is portrayed as monstrous techno-raiders. This is a far cry from the other four incarnations that players had been exposed to over nearly 20 years and is especially striking because much of New Vegas was written by Chris Avellone, a Fallout 2 writer.

Unfortunately, the backstory of the BoS in New Vegas relies heavily on Fallout: Van Buren, which was never finished. Somehow, the Brotherhood of Steel transformed from “research and development powerhouse who reintroduced technology into the wasteland, but stayed out of the NCR power structure” to xenophobic, murdering, hoarders of technology. 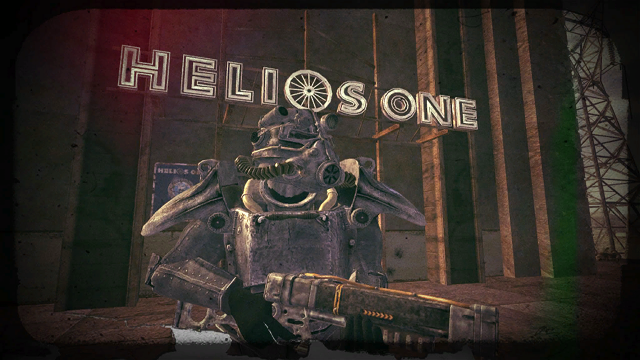 The Mojave chapter of the BoS is portrayed in an overwhelmingly negative light. The player is told that they are xenophobic, isolationist, technology hoarders who will attack people for technology, but the player never sees this. This could have been fixed by something as simple as a random event where a BoS knight demands a player hand over their laser pistol.

The Brotherhood quest line in New Vegas involves being captured (because the player was trespassing), being made into a temporary slave, then having immediate acceptance from the chapter (most of whom need help from the Courier). The Mojave chapter doesn’t steal technology from the player nor task them with collecting technology (as the Outcasts did).

One of the companions, Veronica, notes that there isn’t enough genetic diversity in the Mojave chapter, but the player never sees this either. If the developers wanted to prove their point, they should have clearly made Brotherhood characters with familial relationships. There’s a handful of quests explaining why the Mojave chapter is in trouble, but the narrative impact of these quests doesn’t fit with what the player actually sees. 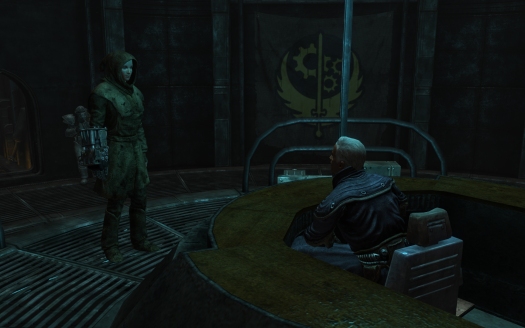 The one “show, don’t tell” moment in New Vegas, is when Veronica approaches the elder with 200 year old prototype technology and tells him outright that they will die if they don’t adapt. The elder promptly dismisses this.

Remember that before their trouble with the NCR the Brotherhood was “research and development powerhouse who reintroduced technology into the wasteland, but stayed out of the NCR power structure.” The New Vegas incarnation doesn’t reflect this, instead it casts the Mojave chapter as a tribe without purpose, merely surviving under the sands.

Had more of the Brotherhood storyline revolved around technological changes and the Helios power plant, it would have created a much stronger narrative for the player to base their opinion on. As it stands, the player is told that the Brotherhood is a band of techno-raiders, but other than Father Elijah (which is a different discussion) they are shown to be  friendly to anyone who passes security and willing to take help from an outsider. The lore and the gameplay simply don’t match up.

Even the Brotherhood’s endings in New Vegas are mostly negative. They are as follows:

It is particularly interesting that the Brotherhood has no allies at the start of New Vegas. House wants them wiped out, Caesar wants them wiped out, and Yes Man sarcastically says that they are the Couriers biggest threat (even if the Courier is a decorated member of the faction). The only group willing to work with the BoS is the NCR, who only agrees because they’re being attacked on all sides and are stretched too thin as it is.

Many disgruntled fans say that the Brotherhood must be destroyed because they are incompatible with the Mojave wasteland being policed by a robot army (House/Independent). However, that only stands if the Brotherhood acts as they have been portrayed, rather than how they are show to act in the game. With an independent ending, the Courier would have the opportunity make the Brotherhood as they once were to NCR, an R&D powerhouse that distributes technology back into the wasteland while staying out of the power structure.

It appears that the lore and direction of the Brotherhood was overtaken by the story of Van Buren. Players were expected to accept that change without questioning the previous five stories about the Brotherhood. As more lore is added to the Fallout universe, the Brotherhood of Steel’s original goal is lost, replaced by a fascist military state hell-bent on keeping technology away from commoners.

It’s been a long ride to this point and it hasn’t always been clear why they have undergone these changes, especially since they were once described as a powerhouse in the NCR government. Though many fans dislike the BoS, the qualms they have are mostly from the latest games (more specifically New Vegas), rather than looking that the organization and the lore as a whole.

One comment on “Unpacking the Brotherhood of Steel: Part 2”