Mad Max: Fury Road had a lot of memorable catchphrases, but one of them transcended becoming a meme and instead appealed directly to one of the film’s overarching themes. Written inside Five Wives’ vault was “WE ARE NOT THINGS”.  The audience immediately relates this phrase to the wives’ role as breeders. However, by looking at the whole of Immortan Joe’s society, as well as some small details from the Fury Road comics, it can be seen that this phrase applies to every resident of The Citadel.

War Boys are the heart of Immortan Joe’s society and exist solely to die for their leader. War Pups are seen powering The Citadel’s elevator and the comics show that parents must give their children away to be raised solely by full grown War Boys. Reinforcing their utterly disposable nature, the majority of these warriors have cancer and will “kamakrazee” themselves in grim situations. Like their iconic thunder-sticks, War Boys are merely weapons to be thrown away. 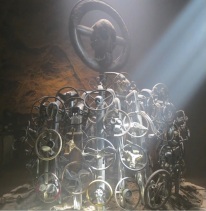 Immortan Joe’s religion, The Cult of the V8, keeps his men in check. Because the religion revolves around reaching Valhalla (traditionally a warrior’s paradise), War Boys are not only willing, but encouraged to die in an exciting manner. This raises the question as to what Immortan Joe meant when he claimed he would personally carry Nux to the gates of Valhalla.

Interestingly, Nux (and others like him) could be identified as a mechanic without speaking a single line, due to the engine block engraved on his chest. Immortan Joe doesn’t need to know the names or proficiencies of his men as they have already been marked for convenience. All these aspects combine to demonstrate at War Boys are designed as things, inevitably doomed and easily replaceable.

Because the focus of Fury Road is the action, it is easy to overlook the background details that brought The Citadel to life. Although mother’s milk is mentioned several times and gets a few minutes of screen time, its larger implication is left to the audience. Milkers are effectively high profile slaves, enjoying the luxury of the Citadel’s throne room, but always attached to their machines. Immortan Joe uses these women as factories, a thing that converts vegetables and water into high calorie nutrients, nothing more.

Expanding on the theme of Immortan Joe’s followers being things is the Organic Mechanic. Merely the title of The Citadel’s only doctor demonstrates that War Boys are no different than a car: a tool that can be broken, fixed, and refueled. Although we don’t see much of the Organic Mechanic, we do see his methods. In Immortan Joe’s society, even enemies are recycled into resources. Road warriors and ferals being transformed into living blood bags once again reflects the theme of people becoming things; not just specialized workers, but actual commodities to be used up.

The History Men are intriguing, but rarely used. Miss Giddy, Five Wives’ teacher, had several of her scenes removed. Although the History Men serve as a framing device for the Fury Road comics, it is worth mentioning that they were not present at all in the Mad Max video game.

The History Men reflect a breakdown of the self to preserve humanity, wearing hundreds of permanent tattoos to remind themselves about the old world. History Men tell stories and serve as teachers and advisors to the powerful, but despite their wisdom they have become a thing as well. The difference between Miss Giddy and the others in Immortan Joe’s realm is that the History Men are willing participants sought all across the wasteland while War Boys and Milkers are victims of conquest.

Finally, there are the five wives themselves. Similar to a fairy-tale, these women have been trapped in a tower, far away from the sick and irradiated wasteland peasants. According to the Furiosa comic, Immortan Joe affords his wives entertainment, books, and Miss Giddy. Already, we see that the wives are not specialized in the same manner as The Citadel’s other denizens. Indeed, Five Wives are taught Greek, a language which would otherwise be lost in post-apocalyptic Australia. Although each of these women hold the title of Breeder, they are far more than that. They sing, they play piano, they speak forgotten languages, they know of past failures and dream of creating a better world from the ashes of the old. 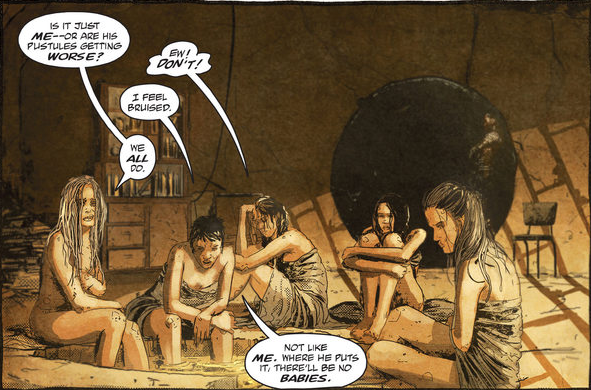 Despite being more well rounded than the other servants, Five Wives are still things within The Citadel’s society. The Immortan even goes so far as to say that Angharad’s child is his property. Outwardly, it appears that Joe is merely using the wives as a means to his ultimate goal of having a healthy male heir. However, one line from the Furiosa comic has always stuck with me. Toast the Knowing says “Not like me. Where he puts it, there’ll be no babies.”

No matter how you look at it, Immortan Joe uses the wives for more than just breeding. Indeed, one panel of the Furiosa comic includes the wives collectively playing music for him. Again, this distinctly separates these women from becoming their title. Whether Joe has any deep feelings towards his wives or merely cares about the child is left ambiguous.

There was another odd statement from the Furiosa comic. The narrator states that “He [Immortan Joe] gave them…knowledge and knowledge has a way of igniting dissent and inciting revolution.” The Immortan is not stupid. His entire society is built around appearing as a God and keeping his subjects in the dark. In the comic, Joe outwardly states his suspicion of Miss Giddy, but does nothing to stop her. It raises the question as to why he would give the wives Miss Giddy when it would certainly lead to his own downfall. Had Joe merely treated the breeders as he treats the Milk Maids or the War Boys, he would never have faced betrayal or death.  Yet neither the comics nor the movie have a good answer to this question, despite that both were written by George Miller.

Immortan Joe turns everyone he meets into a thing, specializing each person until they become a commodity. Wasteland peasants dream of ascending to The Citadel’s barracks, but they don’t realize that they will be transformed into cogs (albeit well-fed) in the Immortan’s great machine. Five Wives were the exception; they were allowed to be more than specialized cogs, yet that allowance ultimately caused the Immortan’s downfall.

Why did Joe provide Five Wives with the History Woman despite being suspicious of her teachings? Tell us in the comments!

Edit: I want to thank Evan (@fromthewastes) for helping me give this article direction. At first it was just a jumbled wordburger, but with a little help it raises some interesting questions.

4 comments on “We Are Not Things: Commodities of the Citadel”