When I first played Fallout 3 on my Xbox 360 way back in 2008, I found myself drawn to the hubs and the quests. Exploring the wasteland was fun, but ultimately I was looking for structure and a story. I’ve recently booted up Fallout 3 again, but this time on the PC. With extreme (but lore friendly) modding, I’ve found the exploration aspect far more enjoyable and the quests frankly lackluster. I want to deconstruct the quests in Fallout 3 to think about how they work in relation to an open world map and the player character’s development choices.

Let’s start with the basics. Not counting the three childhood quests, Fallout 3 has a total of 66 quests in the base game: 10 story quests, 18 side quests, 22 unmarked side quests, and 16 repeatable fetch quests. Again, I want to briefly break down each of these to see how they’ve made use of the new environment and the RPG elements. We’ll continue this series by slowing down and looking at one particular side quest.

The Power of the Atom

“The Power of the Atom” is the first side quest of Fallout 3. Arriving in the game’s first town, the player is tasked with either detonating or diffusing an atomic bomb. This quest makes a strong statement in setting the stakes as high as possible right out of the tutorial.

I want to break this quest down into four sections.

The gameplay of this quest has some strong points geared toward low level players. Destroying the town requires zero skills. You simply apply the pulse charge and run away.
Disabling the bomb only requires an explosives skill of 25, but the game knows players might not want to invest their precious points in an underutilized skill. For that reason, an unmarked side quest is expertly crafted into this scenario.

Someone in Megaton has a drug problem. By learning of their issue (through several different options), the player can help the settler solve their addiction. In exchange, the player gets access to a drug stash. The stash contains mentats, which raises perception, which raises the explosives skill. This is a fantastic (and rare) mix of marked and unmarked quests which also teaches the player about addiction as a gameplay mechanic.

Additionally, there’s one particular speech check in this quest worthy of mention. If you tell Mr. Burke you’re already working for Lucas Simms, the speech check demanding extra caps is more likely to succeed due to your leverage. In this one particular instance, the dialogue tree is more complex than it initially appears. Unfortunately, this never happens again.

What exactly has Megaton done to deserve being destroyed? Nothing. Absolutely nothing. They aren’t slavers, cannibals, or even anti-mutant. The worst they’ve done is refuse clean water to a beggar.

Depending on the scenario, the reasoning for Megaton’s destruction is either because Tenpenny doesn’t like looking at it (even though you can’t actually see Megaton from Tenpenny Tower) OR ghoul leader Roy Phillips wants to kill as many smoothskins as possible just for funsies. Roy Phillips has “good” karma by the way.

So, your choice is: Genocide an entire civilization for literally no reason…or don’t.

This simplistic light side/dark side dynamic plagues Fallout 3 at every corner. There’s no nuance to morality choices. The majority of moral choice in this game can be boiled down to: “Do something monstrous for no reason…or don’t.” 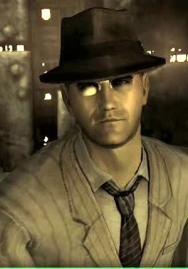 Easily the most boring, meaningless antagonist in the entire Fallout franchise. The fact he’s featured in the first hour of Fallout 3 only adds insult to injury. Burke wants to destroy a 200 year old settlement simply because his boss complained about an eyesore on the horizon (in a world where 90% of buildings are crumbling or abandoned). In response to this off-hand statement, Burke has a custom fusion pulse charge manufactured and attempts to nuke the entire town for no reason.

Somehow this isn’t even the worst part of this cardboard cutout of a character. Upon entering Moriarty’s Saloon for the first time, Burke immediately motions the player over to offer the task of blowing up the entire settlement. This doesn’t make any sense.
Mr. Burke had full trust and faith that the first stranger who entered the Megaton saloon would not only be willing to blow up the entire city for a mere 500 caps (the value of a single Chinese assault rifle), but also that his selected person would not give the one-of-a-kind fusion-pulse charge to the town sheriff. Burke is a cardboard character simply so the quest has an evil option.

Additionally, because Burke is one of the few characters in Fallout 3 to have “very evil” karma, there is no penalty for killing him. You can walk into Moriarty’s saloon for the first time, throw a grenade at Mr. Burke, and suffer zero consequence. The same NPCs who will skin you alive for stealing a fork will then simultaneously say “better him than me.”

Mr. Burke is a bad joke, a one-dimensional character with zero motivation.

Improvement: There was so much missed opportunity in this quest. There could have been some fantastic storytelling and gameplay here. Instead, nothing happens.

I would fix this quest in three ways: Giving agency to the Children of Atom, adding RPG elements, and finally dealing with Mr. Burke.

As I understand it, the Children of Atom believe every split atom results in the creation of another universe. Therefore, the dormant bomb is an important part of their religion. Without the nuke, there will never be another “division.”
This leads to a handful of simple questions: How does the church feel about the bomb? Would they be upset if it was disabled? Would radical members of the church want to detonate the bomb?

I believe that last point highlights where this quest went wrong. Megaton portrays a bomb worshipping cult who believes atomic detonation will lead to salvation. This should give motivation to a radical member of the church who wants to speed up the division. Instead, nothing happens.
Despite having their own fleshed out dogma, journal entries, and their own HQ, the Megaton church has no quests associated with it. The most you get is a sub-cult outside of Megaton in the Broken Steel DLC.

By adding RPG elements, I primarily mean the sneak skill. Confessor Cromwell spends his days preaching in front of the bomb, calling for the division. When a complete stranger tampers with his holy relic (either disabling or rigging the bomb) the Confessor doesn’t bat an eye. Nobody questions the atomic bomb at the center of town making a high-pitched whine after being tampered with.

It would have been interesting if Confessor Cromwell or Lucas Simms question the player for tampering with the bomb. Instead, nothing happens. You can potentially walk into Megaton and immediately tamper with a nuclear bomb without saying a word to anyone.
Imagine if the player could only tamper with the bomb while sneaking or while Confessor Cromwell was sleeping. It would have been a great opportunity for characterization, world building, and roleplaying. 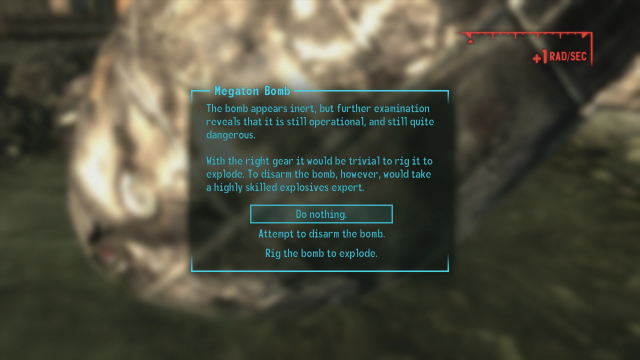 Additionally, notice the flavor text for the bomb says it would require a “highly skilled explosives expert” to disable the nuke. The actual explosives skill required is 25, less than average. It would have been interesting if the skill required was maybe 75. Would that alienate low level players? I don’t think so.

Remember the nuclear plant in Fallout 2? Remember how you could convince one of the ghouls to do the repairs for you, but it required some clever speech options? Remember how you could reprogram a robot to do the repairs for you? Remember how you could solve a symbolic logic puzzle without using any skills?
Fallout 3 could have had that as well. Instead, nothing happens. The nuke is disabled off screen without any puzzling or thought. The two robots in Megaton have no purpose. The player could have been tasked with recruiting a real explosives expert, adding more speech elements to the quest. Instead, this quest is geared toward low level characters. The first side quest of the game sets the stakes at apocalyptic proportions. The result is ruined pacing.

Finally, how can we fix Mr. Burke, if we must have him? Simple. Add an item called “Mr. Burke’s employment contract” to either his or Tenpenny’s inventory. Perhaps add some fluff under “notes” to explain what it means to have a contract. In this manner, Charon and Burke would have the same backstory. Without any further exposition, it would explain why Mr. Burke was obsessed with destroying Megaton and why he felt the need to complete the task after Tenpenny’s demise. As it stands, Burke has no backstory and becomes an utterly dormant character upon completion of “The Power of the Atom.”

The larger issue with this quest is that the option of destroying Megaton exists at all. Since the entire town can be destroyed within the first hour, it means the writers were forced to work around Megaton. Notice that after “Following in his Footsteps” the story line never returns to Megaton. The only other marked quest in the settlement is Wasteland Survival Guide, which is still accessible after destroying Megaton.

Thouhg perhaps the most disappointing part of the entire quest is if dad finds out you nuked Megaton. Informed his only child destroyed an entire civilization and killed dozens of innocent people, James calmly says “I can’t begin to tell you how disappointed I am. We’ll talk about this later.”  The writers of Fallout 3 saw Megaton as they saw the rest of their characters and locations: as little more than a disposable annoyance.