On the surface, The Road Warrior is a fine action movie that defined the post-apocalyptic genre and put everyone involved on the map. If we put aside the action and go a little deeper, we start to see some interesting clues about the Humungus tribe. As we already saw with Lord Humungus and especially Fury Road, George Miller loves adding cryptic details into his films. Perhaps the most discussed and yet mysterious of these details revolves around the Humungus tribe’s not-so-subtle homoeroticism.

At the beginning of the film, we see Wez, his companion, and a few mooks engaged in a fast-paced pursuit. When the scene slows down to give Wez his fist close up, the audience immediately notices Wez’s companion, a young man credited as The Golden Youth, wears a black leather bondage harness. What I’ve always found more interesting is the chain and padlock dangling from his neck.

While Wez is removing the crossbow bolt from his arm, the camera is positioned such that both The Golden Youth and Wez share the frame. In fact, The Golden Youth remains shares the frame throughout the shot, even as the camera pans up to focus on Wez’s twisted expression. George Miller could have done a simple close up of Vernon Wells followed by a reverse reaction shot of Max, but it seems he wanted the viewer to take notice of The Golden Youth, especially since this is the opening scene and the audience’s first encounter with the Humungus tribe.

Early drafts of The Road Warrior suggest The Golden Boy was originally meant to be female, but the writers (Miller, Hayes, and Hannat) wanted to demonstrate that gender roles were meaningless in the post-societal world. This motif comes through with another character who is practically The Golden Youth’s opposite and was originally supposed to be male. The Warrior Woman has agency and character, while The Golden Youth remains silent and submissive until his sudden death.

Some have suggested The Golden Youth was a sex slave, but I think there’s more to it than that, especially since he can be seen wielding an axe handle. The Golden Youth’s death adds another layer to Wez’s character, who would otherwise be a mass murderer without motivation. Alarmed at his partner’s death, Wez erupts into a violent rage. The focus of the scene switches from Humungus’ speech to Wez’s outburst. Humungus knows something about the relationship between Wez and The Golden Youth as the bandit king calls Wez’ name while he kneels next the corpse.

When Wez screams for the murder of Papagallo’s entire tribe, Humungus tries to sooth him, saying “We all lost someone we love.” I believe Lord Humungus’ immediate concern for Wez combined with that additional line provides a little extra insight into the relationship between these characters, particularly since The Golden Youth’s death serves as the motivation for Wez’s unrestrained (and later physically restrained) hatred of Papagallo’s tribe.

The Golden Youth isn’t the only homoerotic aspect of Humungus’ tribe, but it is the most obvious. While Max is eating dog food and watching the warring tribes from the ridge, Humungus can be heard commanding “Smegma Crazies to the left. The gate! Gayboy Berserkers to the gate.”

What does this little detail add to the story? That depends on how you look at it. Some have theorized Smegma Crazies and Gayboy Berserkers are two separate tribes dominated by Lord Humungus. Others say they’re just ranks within the tribe. George Miller is a stickler for little details. The script could have had these characters listed as anything (Wallabeaters, Madboys, etc), but ultimately, we got Gayboys and Smegma Crazies. This tiny detail, combined with Wez’s relationship to The Golden Youth, raises the question as to whether the entire Humungus tribe is homosexual.

I tend to think that, following the post-societal deterioration of gender roles, the Humungus tribe will probably act on any sexual gratification they can get. For example, when Papagallo sends scouts into the wasteland, the couple are immediately captured and raped by the marauders. Similarly, although it may seem that Humungus’ tribe is made entirely of men there’s a handful of female marauders in the background of Humungus’ introduction.

If there was any doubt, there’s also the infamous “tent scene” where the presence of women in the Humungus Tribe is undeniable. These details might lend some credibility to the theory claiming Gayboys and Smegma Crazies were added to Humungus’ fold after the initial founding. Since gender roles only fell apart after the fall of society and since Gayboys and Smegma Crazies are based on military and police, it stands to reason those tribes would be exclusively male and (as their name implies) homosexual.

So what about the bondage gear? While it might serve to subtly separate Humungus’ main force from the sub-tribes, it seems to be a product of the costume designer, rather than the writers. As the story goes, costume designer Norma Moriceau got her inspiration for the Humungus Tribe’s costumes by living next to an S&M shop. Because of that anecdote, whether these outfits say anything about the tribe or if they’re just an odd piece of inspiration seems a little ambiguous, especially since Papagallo’s mechanic also wears studded leather. However, because The Road Warrior defined a genre, it led to the rise of fetish clothing and homosexual marauders in the post-apocalyptic setting. 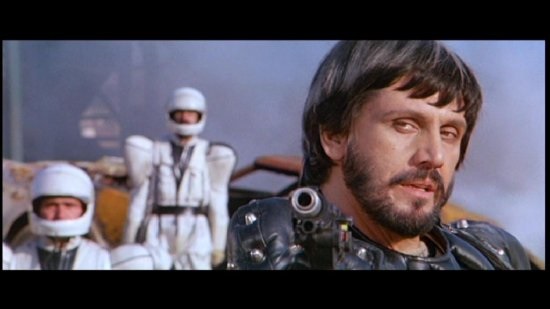 As I’ve often said, The Road Warrior spawned a slew of b-movies trying a cash in on its success. We recently looked at Warriors of the Wasteland, where the antagonists were an explicitly homosexual tribe of nihilist men bent on ending all human life. This twist on Humungus’ tribe adds an abstract element of decay to idea of post-apocalyptic raiders.

By their nature, raiders only destroy. They are vultures, feeding off the old world without putting anything into it. Once the last can of dog food is gone, once the last settlers are tortured and killed, once the last can of guzzolene used up, they will have nothing left. This specific type of raider, first popularized by The Road Warrior, actively seeks to eliminate any chance of human reconstruction. If, as in the case of Warriors of the Wasteland, these raiders are also incapable of reproduction, they become symbolic of horsemen (or motorcyclists) of the apocalypse, looting and murdering until the entire planet is dead.

Do the Smegma Crazies and Gayboy Berserkers matter? Why include such a small detail? Tell us in the comments!

5 comments on “Smegma Crazies, Gayboys, and The Golden Youth”