My Steam library is filled with post-apocalyptic games. Generally, I’ll pick up (or at least wishlist) any apocalyptic game I come across. Desert Law, a real time strategy game, has been in my library for about two years. I picked it up on sale, played it for 10 minutes, and then uninstalled it. However, enough time has passed that I thought the game deserved another chance. Unfortunately, the game aged about as well as a bloated corpse in the wasteland sun.

Desert Law’s narrative makes Wasteland Angel look complex by comparison. After the apocalypse, tribes of road warriors kill each other over booze and car parts. What kind of apocalypse is this? We don’t really know. The entire world is a desert and some places are populated by angry sentient zombies napping beneath the sand.
Here’s the story: Generic wastelander Brad wants to woo a girl for mating season, but rival tribes of gangsters and pre-apocalypse military keep mucking up his plans. Brad convinces his tribe to kill everyone in their way until Jane (the love interest) notices him.

The story is told in comic-book format. Make of the art style what you will. Speech bubbles appear and pages turn automatically. I personally found the speed of these sections to be a little too fast. I wasn’t able to read all the text before the page change. However, considering the prevalence of misused and misspelled words, it’s clear the game doesn’t care about the story and the player shouldn’t either.

Gameplay revolves around commanding a handful of buggies and armored hotrods with swivel turrets. In an interesting twist, drivers can exit vehicles and continue on foot. Hero units drive standard cars, but grant slight bonuses to different vehicles. Like Starcraft, there are a few infiltrator style missions where you abandon your convoy and explore ruined settlements on foot.

Unfortunately, Desert Law is difficult for all the wrong reasons. A great source of difficulty comes from bugged pathfinding. Without micro-management, units will drive directly into scenery. Exciting chases are impossible because cars regularly bump into each other. Destroyed units act as physical barriers. Although the monster-truck unit can smash through concrete walls and small buildings, it cannot drive over destroyed cars. This makes defense missions incredibly difficult as your army is quickly boxed in.

Units disobey orders and tend to chase enemies, making command options (stand ground, ambush, etc) completely useless. There’s no UI feedback to indicate you’ve given a unit orders. On multiple occasions, I’ve set up a defense line around a stationary turret. Despite being set to “stand ground” my weakest unit rushed into the fray before enemies entered the turret’s range. Even worse, this was a hero unit.

The game enters a fail state whenever a hero is killed. This wouldn’t be a problem in most RTS games, but in Desert Law hero units make up the majority of your army. Take, for example, the first real mission of the game. You start the quest with five units, three of them are heroes. As you progress through the quest, you’ll pick up another three heroes. You have a total army size of eight, but only two of your units are permitted to die during the quest. In most RTS games, hero units are exceptionally powerful, giving them enhanced survivability. In Desert Law heroes grant slight bonuses to standard vehicles. All these problems are only exacerbated by generally squishy units.

Enemies are comparable to player units, but are far more numerous. Units can be repaired by the mechanic hero, but there’s a catch. First, the mechanic doesn’t appear in every mission. Second, reflecting the post-apocalyptic setting, every unit has a set amount of ammo per level. The mechanic has no guns, but uses ammo by repairing vehicles.

Just to recap, Desert Law is a strategy game where you instantly fail if any hero unit dies. The majority of your army is comprised of heroes who are only slightly better than standard units. You’re outnumbered 5:1 by enemies who are just as powerful as you. You can repair your vehicles, but can only make 3-4 repairs per mission. The game has no base building, but reinforcements occasionally appear after completing objectives.

There’s not a lot to say about Desert Law. It’s a single player blitzkrieg-style strategy game with an irrelevant story, no voice acting, and poor optimization.  Fortunately, the game is only $2.99, frequently goes on sale, and includes 29 missions. If you’re looking for a cheap distraction or compulsively buy post-apocalyptic games, give it a look.

If you’re interested in Desert Law, you can get it here 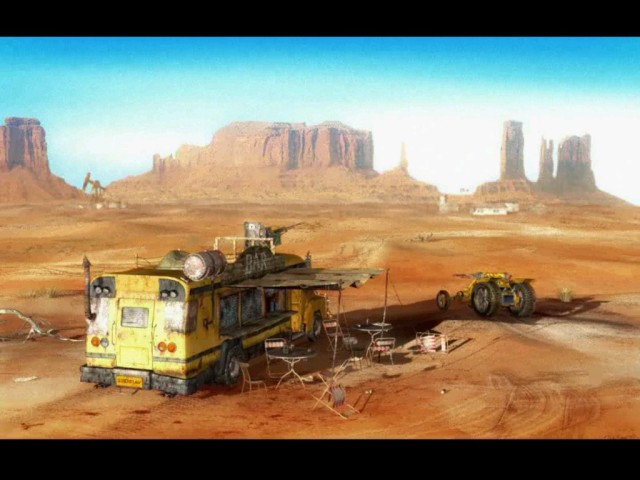