I originally bought 60 Seconds! when it first came out, back in the summer of 2015. After about two hours of play, I requested a refund. However, after hearing that the developers put a lot of work into upgrading and balancing the game, I was willing to give it another try. Unfortunately, 60 Seconds! did not age like a fine wine, but rather like a discarded hunk of smoldering cheese left at the bottom of a radioactive crater.

60 Seconds! is unique in that you can’t quite pin down what kind of game it is. The first 60 seconds of the game (hence the title) revolves around gathering family members and supplies, then stuffing them into your bomb shelter before the apocalypse. This part of the game is offset from the rest in that it takes place in a 3D environment with wacky physics. The rest of the game is like a strange combination of point and click adventure and a sticker-book. The majority of your time will be spent in a 2D bunker scene populated with your (nuclear) family and their equipment, all of which changes based on supplies, health, and sanity. 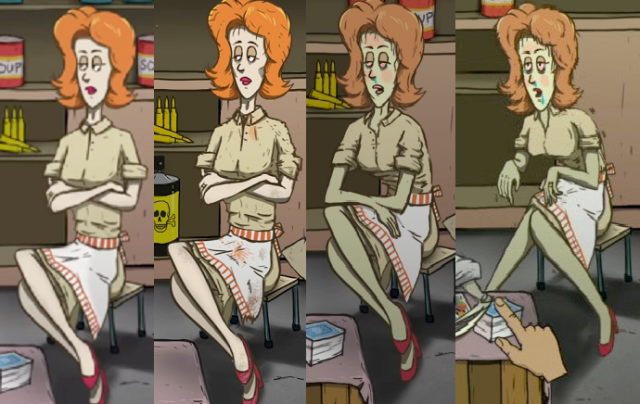 Dolores are you OK?

Before we delve into the gameplay, I want to take a moment to say that the art is the star of the whole game. The effect visuals are really strong. You can tell when someone is hurt by their bandages, when someone is sick by their green skin and splotches, when someone is tired by their slumped over half awake gaze, and when someone is losing their mind by a variety of twitch-eyed expressions. A ton of emotion and storytelling is told through the characters alone. The sergeant, who doesn’t appear in the bunker, has a ton of character conveyed through his smug, careless demeanor. 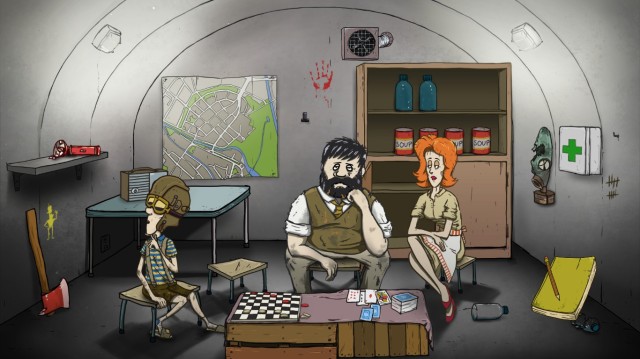 As a side note, I do appreciate how Ted (the father) will grow a beard based on how long you’ve been in the bunker while Dolores (the mother) will continue to glare at her family as her clothes are torn and her hair frizzles. These small details revealed over the course of 30-50 in-game days bring the characters to life in a manner you would never see in a traditional 3D environment or even a 2D adventure game. This is a loving detail that you would only see in cartoon animation.

Now then, back to the gameplay. Once in the bunker, practically everything nonvisual is relayed through your journal. Every day the journal is updated in four parts. First is the result of the previous day’s event. Next is survivor status followed by rationing. The last page of your journal is either the family’s wishful thinking or an event.

Events are simultaneously the heart of the game and its downfall. Because there’s not a lot of meat to the bunker gameplay, events truly only decide if you gain items, lose items, or if a party member is hurt. Every event can be guided to success with an item. For example, using bug-spray to kill rad-roaches. Using an item always produces the same outcome; exploring with a padlock will always net you water. If you don’t have the needed item, you’ll quickly learn that the majority of events are merely a luck of the draw. Most events have multiple outcomes and you never know what you’ll get. There’s no dice or card drawing in place, the game quietly decides whether the event was a success, failure, or critical failure on its own.

There’s only about 40-50 events in 60 Seconds!.  This limitation really shows since there’s an event every day and most sessions will last 50-70 days. You’ll see that same line about people “dressed in green who steal from the rich and give to the poor” 3-5 times per game. The developers added a handful of additional events since 2015, but it’s generally not a good sign when the game’s progression cycle is based around random events and a single type of random event will occur multiple times per session. It means that after a single play-through, you’ve seen everything the game has to offer. As a result, you quickly learn which events are most likely to succeed and which events are most likely to harm you, of course it’s never a guarantee since events without items are always a roll of the dice. 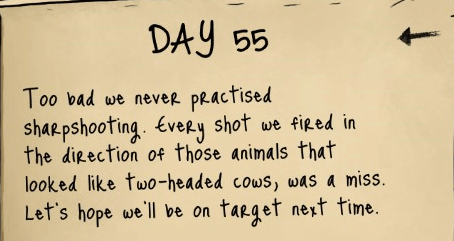 The cardinal sin of comedy games is repetition. Jokes stop being funny if you hear the same one over and over and over again, yet that is exactly what 60 Seconds! has done. Because the majority of gameplay is based on events that you’ll see dozens and dozens of times, any attempt at humor goes stale faster than a discarded hunk of smoldering cheese left at the bottom of a radioactive crater. Not only that, but the jokes are hardly jokes at all. 60 Seconds! tries to be funny in the same way Scary Movie or Disaster Movie tries to be funny, by making references without any substance. Other properties are mentioned just because…they exist. “You found a brown fedora in a refrigerator” isn’t really a joke, it’s a reference. “Animals that looked like two-headed cows” isn’t a joke, there’s nothing funny about it on its own, it’s a reference. 60 Seconds! bills itself as a dark comedy game, but it doesn’t have any comedy behind it.

Aside from your daily events, you must also send family members on wasteland expeditions to gather supplies. These work similarly to the main events. If you equip explorers with a particular item, they are guaranteed to bring something back (if they return at all). For this reason, sending someone to the surface is always risky. While some items will survive the trip, others will break, often leaving you with less than you started with. Such is life in the wasteland. 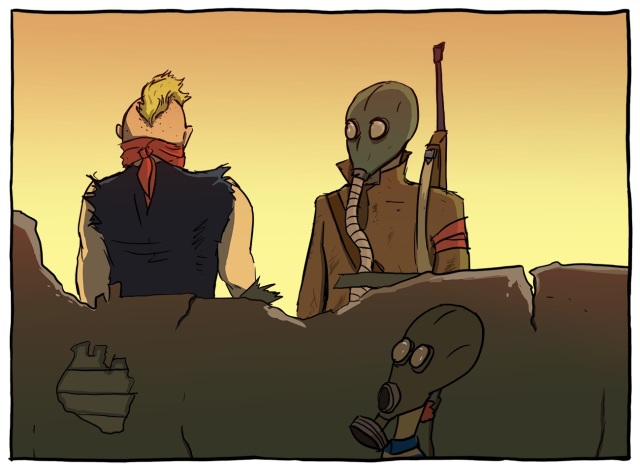 See this? Its not actually in the game.

Expeditions should be fun, but they’re just another gaping black pit in the player engagement curve. Expeditions happen off screen (wouldn’t want the players to have TOO much fun now); the chosen explorer will either return within a few days with loot or they will never be heard from again. To understand what an unengaging design choice this was, imagine for a moment that quests and exploration in Fallout: Shelter were merely a throw of the dice. You’d send your dwellers into the wastes and 8 hours later they’d either start their 8 hour return or you’d never hear from them again. It would be a terrible choice for Fallout: Shelter and its downright boring in 60 Seconds!.

If, as the game’s description says, we’re playing as Ted (the father), we should at least get to explore with him. But we’re not playing as Ted. We’re playing as the entire family at the same time, regardless of who is alive or dead, sick or insane. This pokes at another reason why I didn’t find 60 Seconds! engaging. Outside of their visual design, the family has no character or dialogue. We have no reason to root for these people because we have no idea who they are or what drives them. In something like I Have No Mouth and I Must Scream, another story about a handful of post-nuclear survivors trapped in a nightmarish underground, we understand the characters, their personalities, and how they interact with each other. We feel sorry for them and we want them to beat the machine.

A few journal entries in 60 Seconds! briefly mention hating communists, but that’s too general for a setting bathed in McCarthyism. Every journal entry is calmly written as “we,” even when the bunker has been reduced to a single starving and crazed mother who lost both of her children and her husband to the nuclear holocaust. 60 Seconds! has four character designs, but no characters. We don’t care who survives. Mary Jane is just “the one who eats a lot” and Little Timmy is “the one who brings back more stuff.”

The game’s developer, Robot Gentleman, seemingly addressed both the repetitive events and lack of character in a November 2016 blog post. Here they teased DLC based around rockets, cats, mad scientists, an entire story expanding the mother, and a Steam workshop to allow for user created events. As of June 2017, two years after the game’s release, developers are still advertising these expansions, but have yet to deliver. They have however released a number of challenges for the 60 second scavenger mode, each of which unlocks a cosmetic hat upon completion.

I’ve played 60 Seconds! twice and both times I’ve left the bunker disappointed. While the game has great art direction, 60 Seconds! is a comedy game with references, but no jokes. Gameplay is bare bones, like a sticker book. The events are as tedious and repetitive as the music and often punishing to boot. There’s nothing to keep you here. 60 Seconds! grabs players with a Fallout-inspired motif, but fails to deliver on story, humor, and engaging gameplay. The game’s promotional material counting down to a DLC release literally has more story and art than the actual game.
60 Seconds! retails for $3.99 on the app store and $9.99 on Steam. I’d be more lenient toward an app, but the full release is three times more expensive.
You can stop holding your breath; 60 Seconds! is up and it’s a dud. 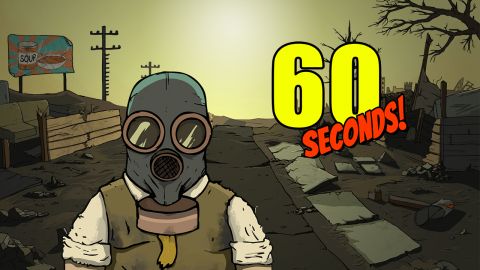 If you’re interested in 60 Seconds!, you can get it on the app store here

If you’re interested in 60 Seconds! on Steam, you can get it here