Our story begins with typical not-Mad-Max archetype, Trace, entering a merchant village. Here we’re introduced to his younger sister, Arlie, and her annoying, controlling boyfriend. In the first five minutes, Arlie’s boyfriend fights in a gladiatorial arena where contestants wear car keys around their necks and beat each other with PVC pipes. Don’t think about it too much. It doesn’t matter.

The fight goes south and our three heroes hit the road, stopping for a moment to discuss their next move. There’s no time to talk though, as Trace is being followed by a massive raider army led by a grizzled man named Scourge. Trace draws the raider’s attention while Arlie and her boyfriend seek cover in the desert hills, only to be ambushed by even more raiders. What’s really interesting here is just how big the cast is. She Wolves used the same 5-10 bounty hunter actors, Warriors of the Wasteland had an army of about 15-20 raiders, even the armies of Lord Humungus weren’t…humongous, but Scourge’s army has 20-50 men on screen for most of their attacks.

In an honestly shocking and horrifying display, Scourge’s army captures Arlie, strips her, and ties her to the hood of a muscle car. Actress Lynda Wiesmeier seems legitimately distressed and terrified as the raiders cut away her clothes and threaten to rape her. Meanwhile, Arlie’s bloodied boyfriend asks Scourge if he can join the raider army.

Sometime later, Trace finds Arlie’s boyfriend being dragged by a jeep. With seemingly unlimited ammunition and perfect accuracy, Trace kills everyone, including Arlie’s boyfriend. At this point, Trace apparently suffers from amnesia, because he makes no effort whatsoever to save his sister for the next hour of the movie. In a truly gruesome and uncomfortable display, every 10 minutes the movie cuts to various raiders raping Arlie and generally treating her like the family dog. Again, Wiesmeier’s performance makes it all the more believable. 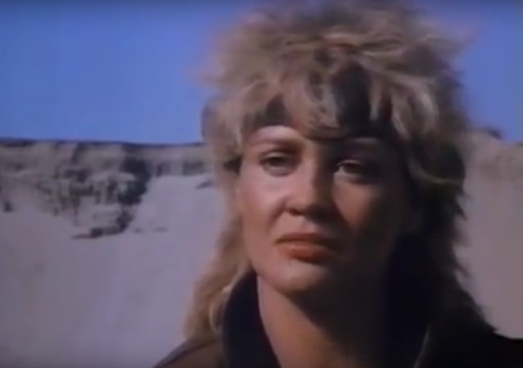 Trace returns to the desert where he meets with a falconer bounty hunter under attack by raiders. Don’t worry about the falcon angle, it only comes up for this one scene. Realizing Scourge is their common enemy, the two team up and make camp. During the night, Stinger the bounty hunter explores the nearby desert, but is dragged beneath the sand and captured by an underground cabal of albino dwarves speaking a gibberish language. Thrown into a cage, Stinger meets a teenage girl. The girl reveals herself to be a mind reading psychic who explains that the albino dwarves are also cannibals.

The following morning, Trace accidentally falls into the sand pit, saves Stinger and the psychic girl, and kills all the albino dwarves in a short action scene.  Minutes later, our heroes come upon a destroyed convoy under attack by feral humans beating the ruined trucks with hammers. The only survivor of the attack is a mute, bow-legged dwarf. Luckily the team’s resident psychic can overcome language barriers through telepathy. 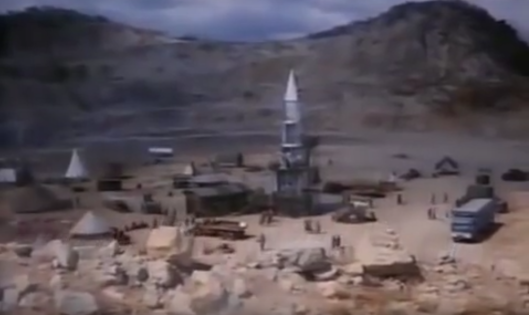 Only at movie’s half way, our four heroes arrive at the village of the True Believers, a cult building a rocket ship. The leader of the True Believers reveals astronomers discovered a planet called Paradise, 50 million miles from Earth just before the apocalypse. Don’t think about it, this is the leader’s only line of dialogue.

At camp, we learn the falconer bounty hunter is working for The Ownership, a cross between extortionist oil barons and pre-war military. The bounty hunter calls Trace weak for refusing to take a stand against Scourge and after a tumble through the sand, the two have perhaps the most awkward and out of place romance scene ever to grace your television screen.

The rest of the movie is a 40-minute-long action scene. The True Believers are wiped out and their rocket is destroyed. Trace infiltrates Scourge’s base, an abandoned castle decked out in massive (WWII era?) artillery platforms, in an effort to save his sister. Meanwhile, The Ownership amasses a truly massive army (like 500 extras and an APC) to attack Scourge head on. Trace and Arlie fight Scourge, the falconer bounty hunter defeats side villain, psychic girl stabs any raiders she comes in contact with, Mutt the bow-legged dwarf serves as comic relief, and there’s a ton of b-roll showing soldiers in green fatigues and yellow vests fighting soldiers in black leather. The Ownership eventually wipes out the raiders to the last man, but Arlie and the bounty hunter are dead. Trace gives Arlie’s car key to psychic girl and Mutt before driving into the sun set. 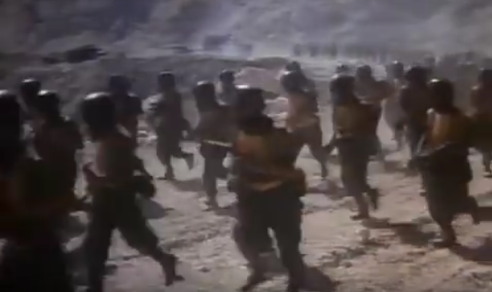 Interesting Concepts: Although the movie is light on exposition and car combat in favor of massive action scenes and shooting people with machine guns, Wheels of Fire still has some interesting ideas, one of which seems a little familiar.

The movie’s opening gladiator fight has two contestants wear car keys around their necks. This is a great idea because it emphasizes the importance of cars at the outset and it allows for gladiatorial combat with a goal beyond beating the other player to a bloody pulp. Ultimately, you’re in it for the keys. As earning a working car is the goal of combat, this seemingly implies mechanics are few and far between in the wasteland, otherwise there’d be more custom cars (like Mad Max and Warriors of the Wasteland) rather than battle groups comprised of spiky muscle cars. Interestingly, this is in direct contrast with the Mad Max video game and comic books. In the revamped world of Fury Road, gladiators fight just for a V8, which will require a mechanic to install and a driver to use.

The True Believers are building a rocket to escape the violent wasteland Earth has become. This is a neat idea on its own, but post-apocalyptic fans have seen it before at a more popular venue. Fallout 2 had the Hubologists of San Francisco who had already built a rocket, but needed Chosen One to get them fuel. The True Believers in Wheels of Fire are working with The Ownership to get rocket fuel. Two sides of the same bottle cap. It’s also briefly worth noting that the leader of the True Believers says the planet of Paradise is 50 million miles from Earth. For comparison, the Martian moon of Phobos is 48 million miles from Earth.

The Ownership faction is a neat idea that had potential for expansion in a video game or novel. They’re apparently pre-war military with a seemingly unlimited supply of gasoline. They freely exchange guzzloene until the newly budding society is dependent on the black juice. The Ownership then incorporates the new tribe into their government through taxation. Politically and strategically, that’s a neat idea. It’s even more interesting since only the leader of The Ownership, The Ambassador, pushes this goal. The rest of the Ownership just wants to cleanse the wasteland of Scourge and his minions.

Cinematography: The editing is awful. It’s not a failed experiment, like Warriors of the Wasteland, it’s more an inexperienced director or cinematographer. Many of the cuts are jarring and obviously out of place. The tragic thing is, it didn’t have to be this way. If the cinematographer had two cameras, they could have captured the wide shot and the close ups in a single take, eliminating the jarring and tonally inconsistent jump cuts. Additionally, between Scourge’s castle and the underground home of the albino dwarves, dark scenes are just too dark. It is possible to get dark lighting that makes a scene dark, but still visible.

The Ending: Normally, this section would discuss characters. Unfortunately, the bulk of characterization happens in just a few lines of dialogue during the first act. After that, characters are on auto pilot, killing everyone who wears black or yellow respectively. By comparison, Warriors of the Wasteland kept things fresh because it introduced a new main character, Nadir, at the middle of the second act. A need to characterize Nadir and explain his relationship to not-Mad-Max Scorpion pushed character development ahead of mindless action scenes. 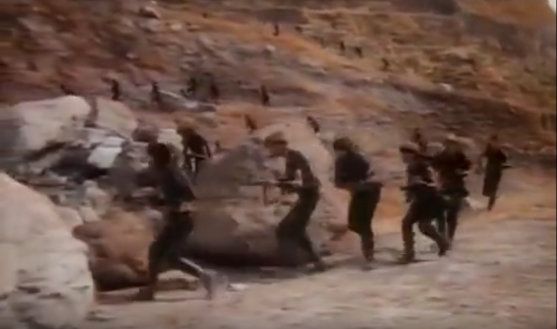 The last 40 minutes of Wheels of Fire is just an overly long action scene with little characterization and an ending that gets wrapped up in just a few minutes. To be fair, having 1000 costumed extras on screen was impressive for a low-budget movie, but a big action scene is no match for proper closure. All of Trace’s concern for his sister shown at the beginning of the movie amounted to nothing. He allowed his kid sister to become Scourges sex slave, didn’t lift a finger to save her for three days, and didn’t even mourn her death.

Extensive action tried to stand in place for character, but it just didn’t’ work. For 90 minutes, we were constantly checking in on a compelling victim of gang rape trying to escape her captors, we want to see her plot resolved. Overly drawn out action is no replacement for human drama and closure. Star Wars: Revenge of the Sith tried to conclude on a massive action scene that creates an illusion of character development when it was really just heavily choreographed fighting. Wheels of Fire, anticlimactically, ended the same way. For a movie with so much promise in its first 30 minutes, its last 40 minutes sadly fell flat.

Does putting value on car keys imply a lack of mechanics? Can action explore relationships between characters? Tell us in the comments!