Should gamers and games journalists take mobile games seriously? I think so. After all, the Pokémon series began on mobile and continues to enjoy its popularity by adapting to new mobile outlets. Mobile games hold a special place as being easy to pick up, fast to play, and most importantly, addictively engaging. That brings us to 2012’s Judge Dredd vs Zombies, a game which never really hits the mark on any of those three elements.

I almost feel guilty because I love Judge Dredd, (I even made a Typing of the Dead mod for Judge Dredd), but I’ve never really liked the official Judge Dredd games. Countdown to Sector 106 is OK in that it relied more on text and story than gameplay and while Dredd vs Death had a great opening, tone, and made you feel like a judge early on, its late game petered off into a generic sci-fi shooter. Meanwhile, Judge Dredd vs Zombies hardly feels like a Judge Dredd game at all. Before we get into that, let’s talk about the gameplay.

You play as Judge Dredd killing zombies in a government hab-block, elderly care hab-block, and Resyk center respectively. Why are there zombies? It doesn’t matter…none of this matters. Much of the game takes the form of a top down, single stick shooter. You control Dredd with the left control pad, automatically lock on to zombies, and fire your weapon with the right control pad. The goal of every level is to reach the zombie kill-quota, thus unlocking the exit.

At first, the game seems unrelentingly difficult due to high damage from enemies, low damage from your guns, and long reload times. You need credits to upgrade your weapons, earned by getting up to three stars and a commendation per level. Commendations are earned by completing a level without taking damage, collecting all badge tokens, and never losing your combo throughout the entire level. At first, this will be pretty difficult due to your weak weapons, but once you get a damage upgrade for the shotgun, the game becomes a cakewalk. Of course, if you’re impatient with your free mobile game, you can buy the ultimate upgrade credit pack for a mere $30 (best value!). 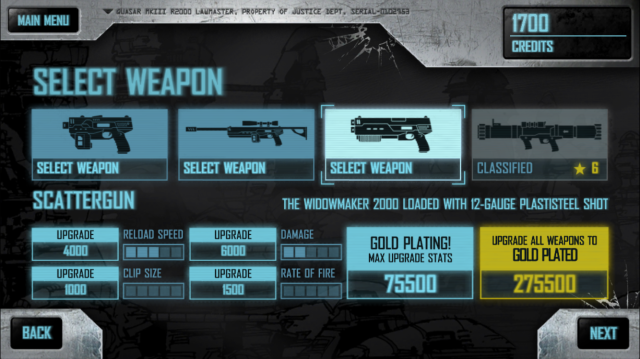 If microtransactions aren’t your style, but you still need help completing levels, you can buy one time upgrades before the game starts. That’s right, although you only earn a one-time reward of 200-1000 credits per level and there are only 30 levels, why not spend 1500 credits for a single level with instant reloads? Sure your reward for getting the commendation won’t make up for the credits you spent to get it, but that’s ok! If you fail the level despite your instant reloads, you can just buy another 1500 credit upgrade and maybe a 1200 credit body armor upgrade to go with it!

What I’m getting at here is that the game is designed around microtransactions. On the “Select Mode” menu, you’ll find the Psi menu. The idea here is that you can use Judge Anderson’s Psi powers to stop crimes before they start. You do this by picking a crime and waiting for a countdown timer. Unfortunately, if you don’t return when the countdown timer is up, you have missed the crime and get to start over. What’s that, you couldn’t pull out your phone to cash in on a prize in a mobile game, well that’s too bad, real gamers have no professional lives. The Psi system tries to frustrate you into buying credits with real money. Thankfully, the game also has “Sector Sweep” a kind of daily reward system which might net you some credits or some free single use upgrades. While this is a pay-to-win game, it still has some acceptable gameplay. 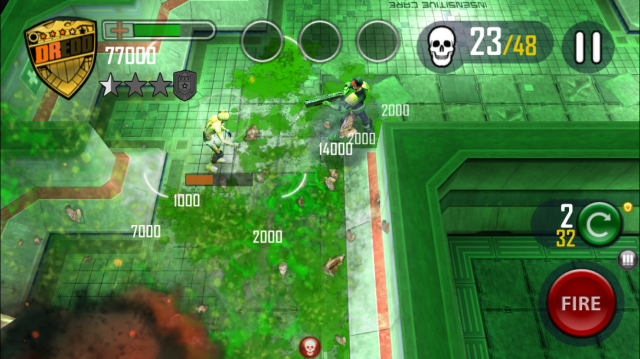 Weapon variety is ok. You have four weapons to choose from: Starter pistol (this is no multi-function lawgiver like in Dredd vs Death), the marksman rifle (which you’re using in tight enclosed hallways for some reason), the shotgun, and a remotely denotated cannonball launcher. There’s even some decent zombie variety. You have the standard weak zombies, the fat and slow zombies who explode into a cloud of damage dealing stun gas, leaping zombies, and the highly damage resistant elderly zombies. Decent variety all around, though not as much as other mobile games of this era *cough* Predators *cough*.

Here’s the issue at the core of Judge Dredd vs Zombies. Why is this a Judge Dredd game? Dredd vs Death had a reason for existing in the 2000 AD universe; Dredd humor (though repetitive) dripped from every pore of the game, the law meter encouraged Dredd to arrest death cultists rather than kill them, and the iconic lawgiver pistol had the multiple firing modes true to the source material. On the other hand, if every element of Judge Dredd vs Zombies was reskinned to be The Walking Dead themed, you would hardly notice.

Without its 2000 AD textures, no single element of Dredd vs Zombies is unique to Judge Dredd. Dredd doesn’t make quips, there’s no context for zombies invading Mega-City One, and the Lawgiver only has one firing mode. So why does this game exist?
To hype people for the 2012 release of Dredd 3D? If so, why does it have a comic art-style and zombies instead of gangsters when the movie toned down the silly sci-fi elements?
To frustrate players into spending $30 to finish the game? That might work on kids, but Dredd 3D was rated R.
To sell comics? If that’s the case, why doesn’t it have more humor elements like Dredd vs Death?

Perhaps the most tragic thing about Judge Dredd vs Zombies is what it could have been.  Consider the Predators mobile game, another movie tie-in released two years before this game. It had no microtransactions, a story, great variation in weapons and enemies, and the gameplay was designed to make you feel like a Predator as you used cloak and ripped skulls from shoulders. Judge Dredd vs Zombies is more of a The Walking Dead game than a Judge Dredd game.

What do you think of Judge Dredd vs Zombies? Tell us in the comments!