The Rad-Lands had an incredible time at Wasteland Weekend VII! Ben and I had been looking forward to this event since we first started the Wasteland Survival Guide show, but we never felt the time was right to actually participate. I had seen plenty of YouTube videos providing an overview of Wasteland Weekend, but the press coverage simply cannot compare to the feeling of standing at Wasteland’s rusty gates. As we pulled into a camping spot, Ben and I were completely overwhelmed. With a population of 4000 people and too many tribes to keep track of, I figured newcomers could use a helping hand navigating Wasteland Weekend VIII and beyond.

Disclaimer: This bi-weekly series will explore The Rad-Lands’ experience at Wasteland Weekend and will hopefully provide content both entertaining and informative. By no means is this an expert guide to Wasteland Weekend, but rather a write up for friends and future attendees.

At 11:30pm on Wednesday night, I was finally in bed after a grueling six-hour flight from Buffalo. By 4:00am, I had my costumes stowed, my gear packed, and had just set off to meet Ben somewhere out in the Mojave Desert. Hours before sunrise, the blinking red lights of the Mojave Wind Farm led the way.

Ben wanted to leave his ranch around 5:00am. After waiting for over hour for the rest of our group, we actually left for Wasteland around 6:30. We all decided it would be better to costume up after arriving. That was a good decision as we were in the car for nearly four hours.

The drive to the site was no problem, just a short 30-40 minute drive. It was getting to the gates that was the hard part. Outside California City, an electric sign reading “SPECIAL EVENT” stood beside a bumpy dirt road stretching farther than the eye could see.

It was only minutes before we hit a roadblock. A line of cars, trailers, and RVs stretching over a mile stood between us and the gates of Wasteland. This is why Ben wanted to leave at 5:00am. Many attendees were lined up at midnight, ready to start making camp. When we finally passed check-in at 10:00am. we were told three hours in line “wasn’t bad.”

Anything you need at Wasteland, you bring yourself. There’s no food, no water, and no bathroom on the ride in; just you, your gear, a line of cars in both directions, and the Mojave Desert. If you even think you need to use the restroom, stop in California City before making the approach. 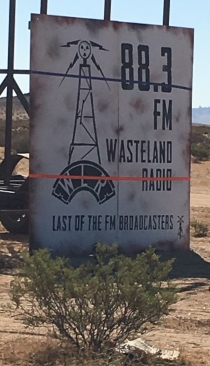 Around an hour into our wait, we finally picked up Wasteland Radio (88.3). Fallout fans will recognize many of the station’s 40s tracks and CONELRAD listeners will pick up on some distinctly nuclear war themed tunes. We’ll cover the Wasteland Communications Center in a later piece.

After two and a half hours, we finally see some properly wastelandish cars. That was all it took to get our energy up. We quickly learned why the line was three hours long. At the Wasteland Weekend security post, one line of cars turns into three. Before you’re allowed in, every single person needs to talk to event staff, show them your ticket and ID, sign a waiver, and get your wristband. With nearly 4000 people in attendance, it’s no wonder the line of cars stretches for over a mile. 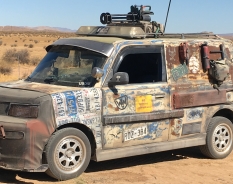 When we finally got through, the adventure began. Instantly we were bombarded by warboys looking for parking, legionaries in their souped-up monster, and a simple wastelander who made camp under a truck cover, marking his territory with a cow skull. We pulled into Buzzard Patch parking, unhooked the trailer, and got to work.