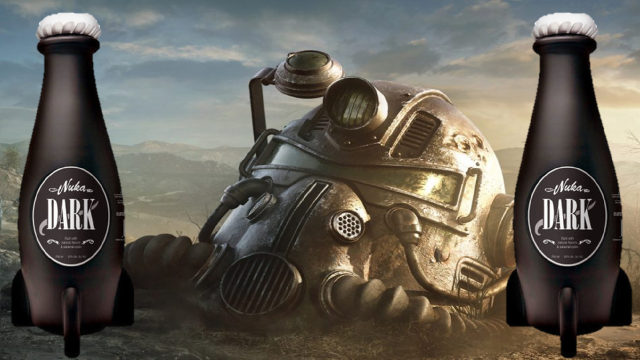 Alright… this isn’t going to win me any fans, but I think someone in the Fallout community needs to say it. Nuka Dark rum is insulting. It is symbolic of a big rusty nail in the coffin of the Fallout franchise.

What do I mean by that? Fallout is bigger than ever. Its games are incredibly popular and review really well. That’s kind of the problem. Bethesda has taken a Disneyesque approach to branding. The focus is not on Fallout, the video game, it’s on Fallout the Lunchbox, Fallout the doll and yes… Fallout the dark rum.

Let’s talk about Nuka Dark rum. It is an $80, 750ml bottle of dark rum with 35% alcohol content. Shipping costs extra, of course. It comes in a plastic Fallout 4 Nuka Cola bottle. They couldn’t even spring for glass.

For comparison, spending $80 on rum anywhere else gets you a 16-year aged dark rum shipped in a straw-lined pine box. The Star-Trek 10-year bourbon (from the same company) preordered for only $60. That’s pretty telling. 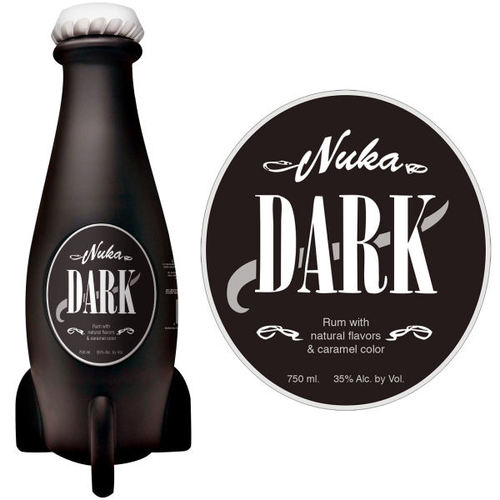 $80 for a plastic bottle. At least the Captain Kirk bourbon looked nice.

Over the past week, I’ve seen die-hard Fallout fans openly reject this. No matter how much brand loyalty they have, normal people aren’t willing to spend over $100 on a bottle of cheap rum. Again, for comparison, you could get 5.25 liters of quality dark rum for the price of a 0.75 liter bottle of Nuka Dark rum and have more alcohol by volume.

Why didn’t Bethesda order regular Nuka Cola? You know, the thing their fans actually want. The thing that appeals most to their teenage/young adult demographic? By making a rum of all things, they’ve alienated a huge portion of their own audience before the product was even bottled. Not just kids, but non-drinkers too.

By setting the price at $80, they cut out what few people remained. Wasteland Weekend is in less than three weeks. These folks are the target market, but the price point is turning almost everyone away. If your target audience is rejecting your product right before their annual meet-up, you have failed. Wastelanders can achieve the same effect, for less than half the cost, by filling an Etsy Nuka Cola bottle with Kraken rum.

This isn’t the first time Bethesda has pulled a ridiculous merchandising stunt like this. On ThinkGeek.com you can get your own, fully articulate suit of T-51b power armor for $350. It is 14 inches tall. That’s more than twice as expensive as similar products of the same category. Oh yeah, it’s also excluded from site discounts and coupons.

I love the T-51b. I’ve always wanted a model of it or even a full-sized helmet since I watched the intro cutscene for Fallout 1 but charging twice as much as their competitors has become a common theme for Bethesda merchandise.
*Addendum: In fairness, the Bethesda store now features a 9″ T-51b statue for only $50.

Look, lots of figurines are more expensive than $350, but a lot of those are also bigger than 14 inches. Besides, how many of them have clothing sets almost half as expensive as the product itself?

The Nuka Cola Armor pack retails for $120. It doesn’t include the actual figurine, just the armor plates. To display the Nuka Cola armor you’d have to spend a total of $470 (plus double shipping). Even American Girl, the queen of expensive children’s toys, doesn’t charge $120 for their most expensive outfit. If a child wanted a $120 dress for a doll, you’d think they were out of their mind, but this is business as usual for the Fallout merchandise machine.

The entire culture of unboxing ensures overpriced products will always sell and create a self-reinforcing popularity loop. Rather than stopping to think ‘is this toy worth asking price’ we buy because it has the Fallout brand on it (and yes this applies to a lot of IPs).

Geek culture has subtly shifted from talking about IPs to wearing them. Audience targeting has shifted. It used to be you’d go to the toy store to look for specialty products. Now, the toy store comes to us in the form of intrusive, targeted ads and it’s only reinforced by nerd culture news sites reporting on the release of branded products as though it’s groundbreaking news… which simultaneously produces more ad space.

Why make a big deal out of this? Plenty of successful video games have a compliment of merchandise. No one is forcing fans to buy these things. Companies are free to sell what they wish. Hell, World of Warcraft has a cookbook (Fallout has one too). Isn’t it a good thing that Fallout is doing so well?

I think this is about more than dolls and overpriced rum. These are only symptoms of a larger pattern that sees Bethesda prioritizing merchandise over the product it’s based on. Now I’m going to get a bit controversial. Buckle up.

Why does anyone like Bethesda RPGs? I’m not just talking about Fallout. Everything I’m about to say applies to the Elder Scrolls series as well.

Bethesda graphics are gross. Their games are buggy. The storylines are so poorly written they’ve become the subject of dozens and dozens and dozens of longform critiques. The quests are consistently badly written and poorly designed. Dialogue is laughable. Indeed, the very history of gameplay (and especially combat) in Bethesda RPGs is catching up to what every other major studio achieved 10 years ago.

While we’re here, consider the following: There are more quests named after songs in Fallout: New Vegas (an Obsidian game) than there are quests in Fallout 3. New Vegas was made in a year and a half and yet has demonstrably deeper characters, story, worldbuilding, and gameplay. Fallout 3 was developed over six years. Fallout 4 took another five years. Both are constantly excusing their own terrible writing and worldbuilding at every single turn.

So I submit: What does Bethesda do to earn our money? What do they actually do that justifies their mediocrity? You might say exploration, but sandbox games have become the norm. I tend to think the answer is a bit more insidious: Branding.

Bethesda has incredible branding that would make Walt Disney himself raise an eyebrow. Vault Boy is iconic. The vault suit is iconic.  Every logo in the franchise would look amazing as a banner on your bedroom wall. But other than the faction logos in Fallout 4, Bethesda didn’t create any of that. They bought it.

Bethesda has made a business out of doing the bare minimum to make their customers happy. They bought a mascot and built an empire around making that character as charming as possible.  Look at Fallout 76. Fans are clamoring for gameplay footage but are primarily getting Vault Boy cartoons.

Fallout as a franchise is wide as an ocean, deep as a puddle. When Bethesda strays from the Brotherhood of Steel, mutants, and raiders you realize they don’t have a lot to work with and are unwilling or unable to push the envelope. You sense something is off but may not be able to recognize why. Then you fall into a gaping mile-wide plot hole and realize the entire franchise is held up by the exhausted, stripped-down remains of Bethesda’s holy trinity: Exploring, Fighting, Looting.

The Fallout brand is growing, but the games fall farther and farther behind in technology, gameplay, and writing. The history of Valve softworks was staying 10 years ahead of the curve in technology and innovation. The history of Bethesda softworks is trying to remain no farther than 10 years behind the rest of the industry. But unless we say enough is enough, Fallout games are only going to fall farther and farther behind until they’re a shell of what they once were. At the same time their merchandise will only become exponentially more expensive.

You want nostalgic Americana? Here’s one: “Just say no.”

We don’t have to buy something just because it has Vault Boy on it. There are so many great post-apocalyptic games on Steam. Push Bethesda to do better. Reject their mediocrity until they make something truly great.