Our story begins with typical not-Mad-Max archetype, Trace, entering a merchant village. Here we’re introduced to his younger sister, Arlie, and her annoying, controlling boyfriend. In the first five minutes, Arlie’s boyfriend fights in a gladiatorial arena where contestants wear car keys around their necks and beat each other with PVC pipes. Don’t think about it too much. It doesn’t matter. END_OF_DOCUMENT_TOKEN_TO_BE_REPLACED

THIS DISCUSSION IS SPOILER HEAVY
You can watch the episode in question at AdultSwim.com until August 6th 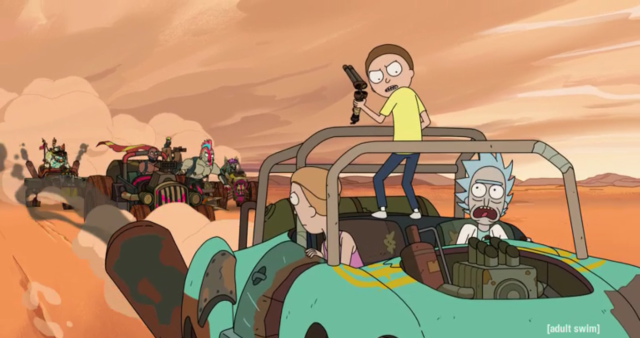 Since Rick and Morty had a Mad-Max style episode, I think it’s time to step beyond our normal comfort zone of Mad-Max and terrible B-movies and talk about it. This episode had some serious hype behind it following the April 1st season premier. After flushing three years of world building down the drain and alienating a member of the main cast in a series of increasingly intense action scenes, the second episode of Rick and Morty’s third season, “Rickmancing the Stone,” had a lot to live up to. Adult Swim published a behind the scenes preview of this particular episode portraying exactly what you’d expect from a Mad-Max parody: Cars, rusty shotguns, and lots of BDSM gear. Did “Rickmancing the Stone” live up to the hype?
In my opinion…not really.

Before we get into why I think this episode fell short, I’ll give credit where it’s due. The art direction in this episode is fantastic. A lot of post-apocalyptic artwork falls into what I call “Apocalyptia Generica,” a style that never quite becomes its own, but rather falls between Mad-Max and realistic urban warfare. For a perfect example of this, see Wasteland Angel.

“Rickmancing the Stone” certainly avoids being generic. Everything has a uniquely 80’s sci-fi style with brilliant and vibrant color schemes. Every single wastelander has a unique character design, even when there are dozens of them on screen at time. I would seriously take any establishing shot in this episode as a desktop wallpaper.

END_OF_DOCUMENT_TOKEN_TO_BE_REPLACED

I’m really not cut out for this.

I woke up to a sharp pressure just below my eyebrows. I was being dragged uphill. My whole body was sore. My arms were all ripped up after being dragged through the rocks. My legs would have been worse if I had been wearing shorts. I had no idea where I was going. That seemed to be happening a lot lately.

Trying to keep my cool, as I had in the spider’s web, I remained perfectly still. The pressure on my skull was such that, I felt whatever was dragging me could blind me or smash my head in at any moment. I did not want to startle my captor. Although I couldn’t look up to see the creature’s whole body, I could tell that it was humanoid as it angrily mumbled to itself. Its fingers were moist and sticky.

Before long, the moonlight and stars over my head were replaced by impenetrable blackness.  I was being dragged into a cave and a fairly nice one at that. My hands drifted through soft sand. It reminded me of the beaches of Brazil. Once all natural light disappeared, I was assaulted by the unsettling creak of rusty iron before being thrown into a cage. This was exactly like my last trip to Brazil.

I heard distinctive click of a padlock followed by the mumblings of a raspy congested voice. Aside from insane gibberings, I could make out “boil da water, add da meat, cook up some’fing real neat.”

Moments later, I could make out a series of sharp clicks coming from my right. The first spark revealed a monstrous silhouette, like that of a body builder. The second spark ignited the kindling, gradually revealing the creature in its entirety. The monster cracked his knuckles and turned to me.

This would be a really good time for Gray to show up.