Con-man, pacifist, business woman, Nazi, scientist. Five improbable entities stuck together in a pit of darkness. A prolonged nightmare of 109 years conducted by a sadistic self-aware supercomputer with unlimited power. This is Harlan Ellison’s I Have No Mouth and I Must Scream.

Although on the surface IHNMAIMS is a straightforward story about five people trapped in an endless underground complex after a nuclear war, it has transcended into a franchise. The human characters from the short story were greatly expanded upon in the 1995 video game while the supercomputer, AM, gained some depth in a 2001 radio drama. A comic adaptation exists as well. This has become one of my favorite post-apocalyptic stories due to the development of the characters and the themes at play.

In this series, we’ll break down each of the humans: exposing their fatal flaws and identifying what led them to redemption (and further punishment). 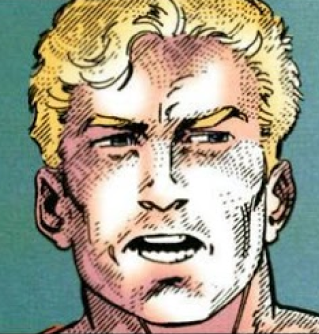 Gorrister. The first character introduced in both the text and the video game. Originally, he was a conscientious objector, a peace marcher. In the game, he was an electrician and truck driver before the machine captured him. The only similarity between the two versions of this character is the spoken wish for death. END_OF_DOCUMENT_TOKEN_TO_BE_REPLACED

It’s not even funny anymore…

After suffering through the perils of the wasteland, I finally made it back to Abundance. I was beaten up, almost eaten by giant mutant spiders, had all my stuff stolen, wandered through the desert without any water, was captured and almost eaten by a disgusting mutant, AND to top it all off I had my arm broken in three places before I was set free.  So…what do I get for my trouble when I walk into town with a full five gallon jug on my back? Nothing. Absolutely friggen nothing.

I walked into town to find that the town was basically empty. The saloon was all locked up. I heard some hustle and bustle from the fortress wall at the end of the street, so I went to check it out. A line of some hundred people stretched out onto the street. Soldier boys all dressed up in black armor and rusty red fatigues kept the peace from the fortress’ battlements. Something big was happening here.

With nothing else to do, I decide to get in line to see what’s up.  I quickly realized that every person coming out of the fortress was proudly carrying a canteen with a funny looking 47 on it.  Over an hour passed before I passed the fortress gates. I couldn’t believe the inside of this place. Everything was just like the old times! The streets were freshly paved, not a pothole in sight. The buildings were blocky, made of white concrete, and electricity flowed freely. Oasis had nothing on this place.

Another hour passed before I finally got to the front of the line. I came before a table in front of the only two story building on the base. Two guards fumbled with paperwork. The first asked for my canteen. With sharp pain in my arm, I removed my pack and presented the five gallon jug. The two soldiers turned to each other with smarmy grins. One of the goons spoke into a walkie talkie then asked me to step out of line. A few minutes later he showed up.

The notorious James Gray appeared, along with a bald old man wearing a black leather greatcoat covered in medals. The Australian recognized me this time.

“Hey there little buddy, you’re not lookin’ so good. Whatcha got there?”

I presented my jug once again and explained that I had discovered a sustainable water source. I told them that I would just need some workhands to assemble a caravan. The old man let out a light chuckle. His voice was roached out, like he hadn’t had a drink in ages.

“Old Gray here beat’cha too it, son.” He said, placing a fatherly hand on the bushman’s shoulder.

Well, this isn’t so bad, 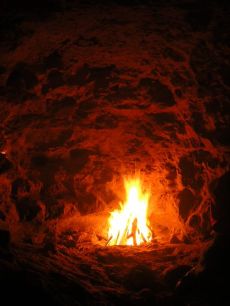 There I was, trapped in a cage like a common animal. My captor was busy nursing a crackling fire. With the cave illuminated, I was able to orient myself to the exit portal. Looking around, I found a mattress, a chessboard resting on a table of stacked car rims, and even a carved china cabinet full of knick-knacks.

I was then distracted by an unpleasant pattering sound that scratched the back of my mind and caused my eyebrows to twitch and my neck muscles to tense. Turning away from the fire, I spotted a collection of drying pots and pans. Licking my cracked lips, I watched as precious water droplets rhythmically plopped into a tin dish. Though my head was still pounding from dehydration, I knew that my captor had must have a sustainable water source if he was willing to waste such a valuable commodity on washing dishes.

A monstrous humanoid shadow appeared on the wall in front of me, growing larger and larger as the sound of crunching sand grew louder and louder. Trembling, I turned around to formally meet my kidnapper. I don’t know what I was expecting.

Grabbing the iron lattice, the mutant revealed himself in all his horrific glory. My captor stood nearly seven feet tall. His flesh was a sickly yellowish green that had the consistency of fresh mucus. His whole body unnaturally oozed and festered, yet not a single drop of slime fell from his body. An odd explosive glow churned in his bloated belly. He wore little more than leather boots, tattered cargo shorts, and a pouch bandolier that seemed fused to his chest.

My captor introduced himself as Urmit, apparently of a race called the hulking horrors. My teeth chattering, I silently nodded my head. Suddenly, the mutant’s body made a grotesque crunching sound, similar to splitting wood. His muscular left arm atrophied until it was little more than a five fingered stump, while his right arm turned into a tentacle, slithering into the cage to meet me with a handshake.

Retracting his right arm and re-growing his left, the horror noted that I was extremely dehydrated. He picked up the tin dish full of drippings and slid it into my cage. As I emptied the curved plate, Urmit asked what I was doing out in the desert without any gear. I plainly told him that I was looking for a water source to help the people of Abundance. It was the truth after all, mostly.

“You mean like dat?” the mutant asked, pointing behind me.

I turned around once again to find a reflective pool that stretched as far back into the cave as I could see.

Now I just need to play my card right and get out of here.