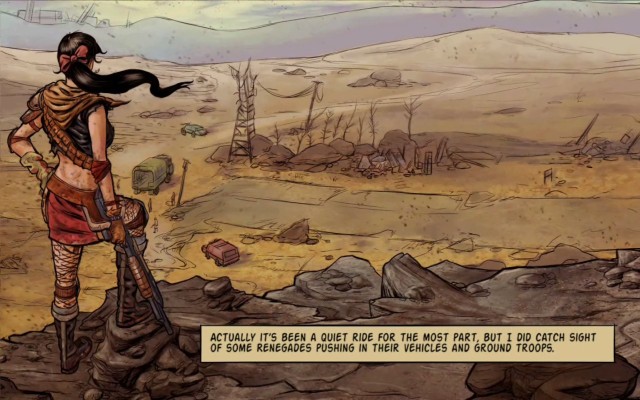 Although an arcade shooter, Wasteland Angel boasts a story, told in comic book form, about the titular Angel (essentially a female Mad Max) driving across post-nuclear America to find an old acquaintance. In her quest, she will pass through a number of villages, each of which is being attacked by slavers with either a generic raider, Russian militant, or super mutant theme.

There are six chapters in Wasteland Angel, each of which is split into four levels. The first two levels always consist of slaughtering wave after wave of enemies as they try to abduct settlers from the local village. The third level is a boss battle in which you must “trick” a super vehicle into running over a napalm trail or land mines. The fourth level is a bonus round in first person, either a rampage mission or a race (against time, not AI cars).

Unfortunately, this formula gets old very quickly. There’s just not enough variety, either in enemies or gameplay. Once you’ve played the first two chapters, there’s really no reason to continue unless you want to finish the story.
The first two missions of every chapter are incredibly tedious as you must fight off hundreds of vehicles across 20+ waves. Worse is that there’s little variety in enemies. Even the boss battles are recycled.

There are three enemies in Wasteland Angel with a different coat of paint for each faction:

Occasionally, enemies will use your own items against you (some will leave a trail of napalm behind them), but between monotonous waves and little enemy variation, there’s not a lot to see here. 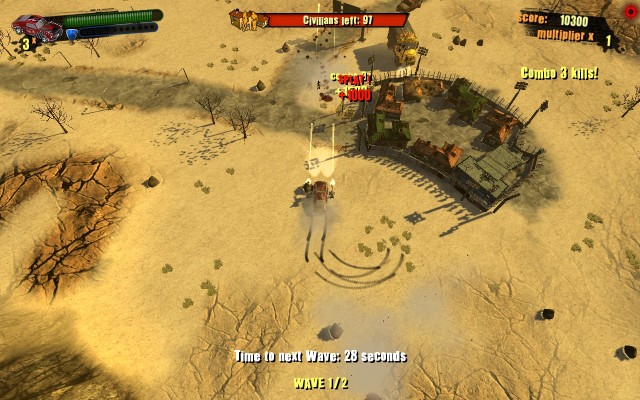 All this isn’t to say that Wasteland Angel isn’t fun. Although fleeting, there is some fun to be had with the vehicular aspect as well as the wasteland motif. Being that you’re in a car, your car makes wide, realistic turns. Guns only point toward the front of the car, meaning that players who adopt naval strategy will find themselves with more health and more time. Interestingly, cars react somewhat realistically to bullets. If bullets only graze your target, no damage is done and the player is treated to a metallic ping.  When a car is satisfyingly destroyed, it will often leave a driver in its place who will either shoot at the player or run away. Bonus points are granted for splattering raiders with your car. There’s great combat feedback and the car controls feel like Mad Max, albeit with more bullets, rockets, and mini-nukes. 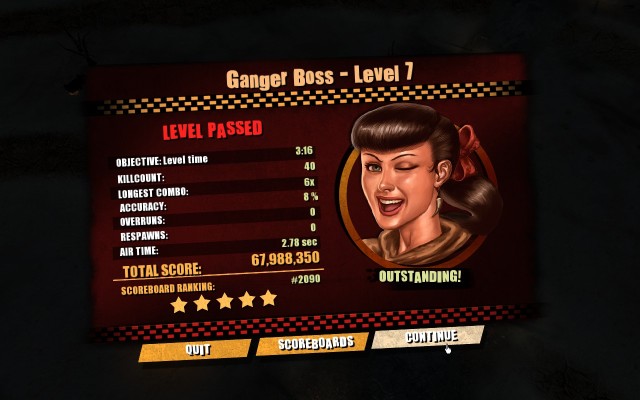 Wasteland Angel’s tone and art style lies somewhere between Mad Max and Fallout. Small details, such as kneecappers, were added to enemy cars to make them look more wastelandish. The bandit character models are surprisingly detailed in a classic Road Warrior style. However, the Fallout art style shines through in the titular Angel, who wears a pink skirt and a pink bow-tie in her hair.  The opening menu and the post-mission score card both take on a 1960s pinup motif, adding to that Fallout feel. Additionally, Wasteland Angel includes super mutant rip-offs for its final act. Unfortunately, because the game chose a middle of the road approach to its art style, it inevitably comes off as generic. There are hundreds of pictures of post-apocalyptic cars on Deviantart, but many of them are drawn in the same style, a style which Wasteland Angel followed as well. 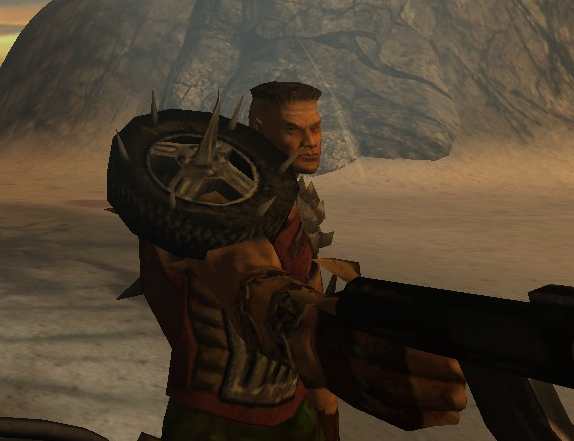 Finally, I’m not sure that the post-nuclear atmosphere was the best choice for this game.
I enjoyed it, but there’s a dissonance between the setting and the action. The post-apocalyptic genre is always about scarcity in one form or another, but Wasteland Angel has the player firing hundreds of bullets per second while facing off against hundreds of enemies in a single battle. Infinite ammo and near infinite enemies don’t really reflect the setting Octane Games has chosen.
This game would have worked better as the story of a sci-fi bounty hunter saving planetary settlers from space pirates. Such a narrative would have better connected with the gameplay and could have improved review scores.

As it stands, Wasteland Angel is fun for maybe an hour. There are some fun aspects with the car controls, bonus missions, and weapons, but they don’t make up for the long and tedious missions or the copy/pasted boss battles. Although I always try to recommend a piece of media to some specific person, I can only recommend Wasteland Angel for 30-45 minutes. It’s forgettable

If you’re interested in Wasteland Angel you can get it here.